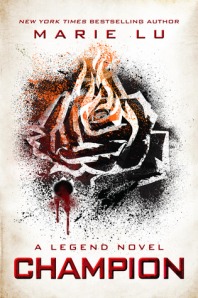 Champion is the third book in the fast-paced and emotional Legend series, written by Marie Lu.

June and Day have sacrificed so much. Both for the Republic, and for each other. Now June has the position of Priceps-Elect – a highly respected role that she’s been aiming towards her whole life. And Day has been assigned to a high-level military position. Life for June and Day couldn’t be better. Could it?

Just as the Republic is on the verge of a peace-treaty with the Colonies, a deadly plague breaks out, creating even more tension between the Republic and the Colonies. The plague’s outbreak causes panic in the Colonies and war threatens the Republic. This new plague is more lethal than ever, and June is the only one who knows the key to the Republic’s survival. But in order to save everyone, the one she loves must sacrifice everything.

I enjoyed reading Champion. After the heart-breaking end to Prodigy, I couldn’t wait to read this book. We had just found out that Day was really sick and possibly going to die… how could Marie Lu leave us like that at the end of Prodigy? After finishing Prodigy, I needed to read Champion. Okay. I need to release all of my emotions and talk about Champion without worrying about spoilers. If you haven’t read Champion yet, now’s the time to stop reading this and instead go and read Champion!
Until I started reading Champion I was wondering; what was going to happen between June and Day? June and Day didn’t come together until the middle of the book, which broke my heart. Because I believed Day was going to die within a few months, I wanted him and June to be together a lot more than he was with her. I wanted them to spend every second with each other, making the most of the time Day had left. But anytime Day tried to do something that he’d normally do, I became terrified for his life. He got those awful headaches that consumed him to the point where he couldn’t do anything but lie on the ground in agony. I was worried about him and although I wanted to do the things he used to do, I constantly feared for him.
One of my favourite parts of this book was when June went to New Antarctica. It was totally brilliant. June put on her glasses that the people gave to here there and suddenly people could talk to here without an accent. She saw a +1 sign hovering above a plant that needed watering and you would gain one point from watering it. I loved how it was so videogame-like in the way that you could gain points to move up levels. It was genius and I loved that whole chapter.
The ending of the book was unbelievably emotional. When Day got … NO! I couldn’t believe it! This could not be happening. I found myself up until 2am, reading, desperately hoping that the book wasn’t going to end like that. Tears streamed down my face as I begged for this not to happen. The way Day spoke to June as though he wouldn’t make it, made me believe he wasn’t going to survive. I couldn’t even think about the fact that he might not live. The whole scene was excruciating. But when Day said, ‘I don’t want to go,’ my heart broke all over again. I thought of all the hard things he’s gone through. Why did this have to happen to him? Then when he saw his mother reaching out to him… I just couldn’t take it anymore. It reminded me of the ending of another dystopian series and prayed that Champion wouldn’t end like that.
But then, something worse happened. That plot-twist was unbearable. How could Marie Lu do this to us? I literally had to put the book down, find a box of tissue, compose myself so I didn’t ruin the book with all my tears, and then read the ending of Champion. When I finished the ending, I couldn’t believe this series was over. I wasn’t happy with the ending. Couldn’t the end of a dystopian series by happy for once? It left me completely heart-broken and although I could see June and Day having a happy future together, I wished Day could remember June. He was even still wearing the paper-clip ring, which was really sweet. After the 10 Years Later part, I would have loved an additional 5 Years Later part where we could have seen June and Day living together, perhaps with children. I would loved a more concrete ending, but I guess I also kind of liked how Marie Lu left us to predict what was going to happen.
One thing I was happy about was Eden getting better. I was so pleased he wasn’t sick anymore. But there was one thing I wondered about. Why didn’t Eden tell Day about June? If I were Eden, I would surely have slipped up once or twice by mentioning June’s name. Anyway, I loved how he was healthy and animated when we got to see him again in the 10 Years Later part.
I’m not sure whether I completely liked reading Champion, but it was definitely worth reading. I’d give Champion by Marie Lu a score of 8 out of 10. Please share your feelings about the end of this book! Were you happy with the way Marie Lu ended this series? Where you a complete emotional wreck after reading the end of this series? I’d love to hear your opinions! 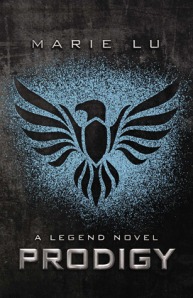 Prodigy is the fast-paced second book in the Legend series, written by Marie Lu.

After escaping the Republic in Los Angeles, June and Day arrive in Vegas. Just as the nation is unstable and so close to a revolution, the unthinkable happens. The Elector dies and his son, Anden, takes his place. As the Republic edges nearer to complete pandemonium, the pair joins up with a rebel group called the Patriots who agree to help Day get his younger brother back. In return, the Patriots request one thing – June and Day must assassinate the new Elector.

It’s their chance to give the nation a fresh start without an elector ruling over them. It’s their chance to give the nation a voice – a nation that’s been silenced for too long. But then June realises that Anden is nothing like his father. Anden wants to bring the poor out of poverty and get rid of the whole Trials system for good. But if June won’t kill the Elector, the Patriots will assume she’s the traitor they always thought she was and they will hunt her down.

But what if a revolution must be more than anger, blood and vengeance? What if the Patriots are wrong? At what lengths will June go to save the Elector?

I completely, 100% loved reading Prodigy. It was even better than the first book! The stakes are raised so much higher and the story was even more fast-paced than Legend. I liked seeing more of Anden and learning about what he wanted to do with the Republic. I love Day, but Anden was just so charming and sweet. If June never met Day, I can really imagine her and Anden together. I also loved seeing more of Tess in this book. I learnt what she really thought of Day. It was interesting hearing what the Patriots thought of June even though they didn’t know her. Because I felt so connected to June, I felt so sorry for her that she was no longer a part of the the Republic and didn’t really fit in with the Patriots. There were unbelievable twists in the plot line that I never saw coming. The ending was the saddest, most heartbreaking thing. I still can’t believe it. This can’t be possible. I need to read the next book right now. If you’ve already read Legend and haven’t picked up Prodigy yet, reading it is a must. I absolutely loved Prodigy by Marie Lu and I’d give it a score of 9.5 out of 10. 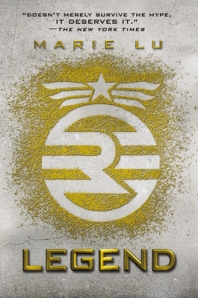 Legend is the exhilarating first book in its series by Marie Lu.

Once known as America, the western coast of the United States in now known as the Republic. The Republic is a nation that is constantly at war with its neighbours, the Colonies.

Fifteen year-old June was born into an elite family in a rich sector of the Republic. June is a prodigy. Highly skilled, obedient, passionate and dedicated to protecting the Republic, she is the perfect soldier.

In a poor area of the Republic, fifteen year-old Day is the country’s most wanted criminal. Although Day might seem dangerous, his motives aren’t nearly as wicked as they appear to be.

June and Day have no reason to cross paths. Until June’s brother, Metias, is murdered and Day becomes a prime suspect. In a ferocious game of cat and mouse, Day races for his family’s survival, while June tries desperately to avenge her brother’s death. But then the truth about what really brought June and Day together is unleashed, the pair discovers that the country is going to sinister lengths to keep its secrets.

I loved reading Prodigy. The very first sentence, ‘My mother thinks I’m dead’, really captured me and made me want to keep reading. At a glance, I was a little sceptical of how well the alternating chapters from June and Day’s perspective would work out. Although when I started reading it, I understood why the author needed to do this and how everything that happened from the different points of view were important to the story line. There was never a boring moment for me as the story was so full of action the whole time. It was fast-paced and never left me any time to find a good place to put the book down, which meant I read the whole book in a matter of two days. I was completely in love with the main characters. I was really curious to learn Day’s full story. He seemed like a really mysterious, yet caring person. Because Day looked after Tess, a girl who he took under his wing years ago, I knew Day wasn’t as evil as the Republic saw him as. The way he looked after Tess and always worried about her made me care for him and want him to commit these crimes to help his family. Doing those things to help his family and Tess made me feel so empathetic towards him and the situation he’s in. When I first met June, I immediately believed she was just a spoilt, arrogant girl who thought she could get away with anything just because she was a ‘prodigy’ and scored 1500 on her Trial. Little did I know how connected I’d end up feeling to her. When June and Day first met… wow. I immediately felt the chemistry between them. I loved how the story flowed perfectly when June and Day were together. I found myself loving every second they were together and I couldn’t believe what happened in the end. I struggled to tear my eyes from the page and longed to find out what happened. I absolutely loved reading Legend by Marie Lu and I’d give it a score of 9 out of 10. I’ve already started reading the next book!