THIS IS A SPOILER-FREE REVIEW

So… I FINALLY SAW HARRY POTTER AND THE CURSED CHILD! I know, I know, I feel like I’m the last person in Melbourne to see it. But I also know I’m super lucky to even have had this chance! We Aussies sure have been privileged recently with all the plays and musicals coming to our city (we’re still waiting on Hamilton, but come on, any day now there should be an announcement), but despite The Cursed Child having been in my sweet home town for like eight months already, I only just got around to getting my tickets. And BOY was it worth the wait!

The main reason why I waited so long to get around to seeing it was because the tickets are just SO. DAMN. EXPENSIVE. And I’m too stubborn to wait in a virtual queue on the ticket’s first release day, so I just always had it on my “oh yeah, I’ll do it later” list. But after entering the Friday Forty (a lottery whereby you can enter each week for the chance to see The Cursed Child for the reduced price of $40 per part) every single week since it started, I still hadn’t been lucky enough to score myself some tickets. So I bought some candles, went to an abandoned mansion by the ocean, and sold my soul to the devil to get enough money to buy some tickets of my own. 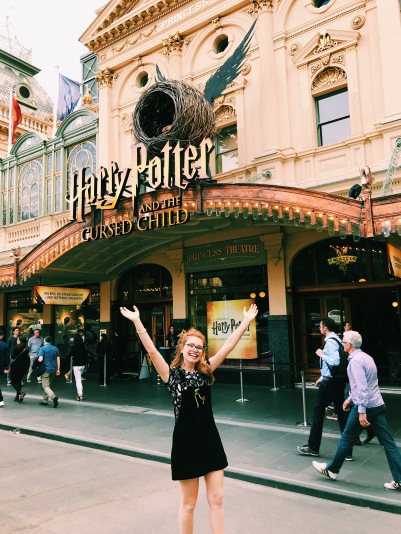 And then finally last week, it was MY TIME TO WATCH THE MAGNIFICENCE OF THE SHOW! I’d heard such amazing things about it and I knew it was going to be visually spectacular, so I was practically bursting with excitement when I rocked up at the beautiful Princess Theatre. I snapped a photo beneath the famous sign, bought a program, checked out the gift store, then walked into the auditorium that had been done up in glorious Cursed Child carpet and wallpaper. I was sitting in the second tier, so I had a great view of the entire stage. You could either opt to see both parts in one day or see them over two nights—I did the latter. I wanted to make this incredible experience last as long as possible!

I’d read the play script the day it came out—I was even at the store waiting in line from 7.30am to be one of the first to get my copy—but it’s been so long that I could only vaguely remember the plot. I chose not to reread it before seeing it because I still wanted to be a bit surprised by the things that happened. I ended up gasping in surprise quite a few times, along with the rest of the audience! I laughed, I cried, and I swooned a heck of a lot over our gorgeous Scorpius. HIM AND ALBUS… I can’t handle it.

One of the things that most people talk about as soon as they’ve seen the play is just how amazing the magic tricks are. When I was reading the script, there were more than a few instances where I was like… how exactly are they going to do this on stage?, and some of the things were truly mind-blowing. We were all totally shook! And the end of Act 1 was by far one of the coolest moments in the entire play. Like WHAT! HOW?!

Seeing the characters depicted in this was was… interesting to say the least. We have our original golden trio, as well as some other side characters, and I loved seeing them again. It’s hard comparing them to the original depictions in the films because they are significantly older, but there were a few times when I kind of cocked my head to the side and was like: Would this person really say that?. On the whole, Hermione was a force to be reckoned with, Ron was hilarious and I can totally see him being that person, Harry was also great, but I felt a bit let down by the director’s interpretation of Ginny. I was really happy with the surprise visit of another character I’d totally forgotten was a part of the play though!

And then there are the kids—Albus (Harry and Ginny’s son), Scorpius (Draco’s son), and Rose (Ron and Hermione’s daughter). Rose was certainly a lot of fun to watch on stage, even if she wasn’t in it an awful lot. Albus was pretty good as well, but I felt the was definitely overshadowed by the incredible performance by Scorpius. I LOVED HIM SO MUCH. I loved him and Albus in the script book, but seeing them interact on stage together was totally swoon-worthy. Literally everyone in the audience went awww when the lines “you’re my best friend” and “we can hug too!” were spoken.

I left The Cursed Child with just the BIGGEST smile on my face, and I’m already looking forward to seeing it again—though I’m going to have to try and find another soul to sell to get tickets. The magic was awe-inspiring, the characters were people you’d be willing to take a bullet for, and it’s just the biggest and best celebration of Harry Potter since the opening of the various Harry Potter worlds. If you have the opportunity to go and see the play, you won’t regret it!

Have you seen the play yet? Did you read the script? What did you think of it? Do you love Scorpius as much as I do? I’d love to know!