Ta da! See, I told you I could do it! Step outside of my comfort zone and try to collate my thoughts about a particular book into less than 400 words. It was a challenge that mostly consisted of incoherent screaming, procrastination snacking, and lying on the ground in the foetal position wondering what the purpose of life is, but I DID IT!

While I love to write long and rambly reviews, they DO take a lot of time, and when I go to seek out reviews personally, I find that I prefer to read shorter ones if possible. I love a good rant, but sometimes all I want is 300 or 400 words telling me why I should pick up a book, or why I should avoid it like the plague.

THANKFULLY, most of the books I’ve read recently have been marvellous! So today, I’d like to share my thoughts on three of my recent reads, and hopefully convince you to pick a couple up and add them to your monstrous TBR. ENJOY! 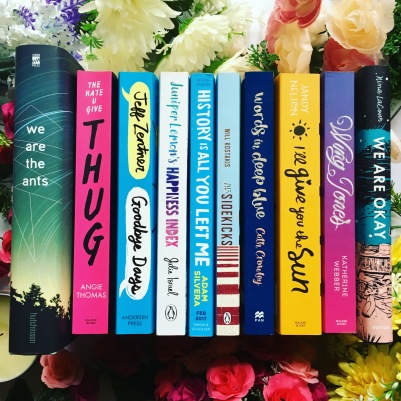 When ten-year-old Daniel Tate went missing from one of California’s most elite communities, he left no trace. He simply vanished.

Six years later, when he resurfaces on a snowy street in Vancouver, he’s no longer the same boy. His sandy hair is darker, the freckles are gone, and he’s initially too traumatized to speak, but he’s alive. His overjoyed family brings him home to a world of luxury and comfort he can barely remember. In time, they assure him, he’ll recover his memories; all that matters now is they’re together again.

It’s perfect. A miracle. Except for one thing. He isn’t Daniel Tate.

He’s a petty con artist who accidentally stumbled into the scam of a lifetime, and he soon learns he’s not the only one in the Tate household with something to hide. The family has as many secrets as they have millions in the bank, and one of them might be ready to kill to keep the worst one buried. 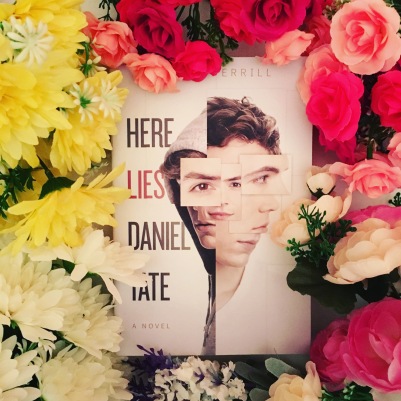 I haven’t seen many people screaming about the amazing-ness of Here Lies Daniel Tate, so I’m here today to do exactly that! WOW, THIS BOOK WAS INTENSE. There’s a good chunk of the novel where I legitimately thought everything could be okay and Daniel (well, the con artist pretending to be Danny) could live a happy life in the future, but NOPE. Just when things were beginning to look up, the narrative was taken in a whole new direction and I absolutely loved how many twists there was. AND I GUESSED NONE OF THEM! I’m still flailing because of this book.

Let me talk about the adorable munchkin / con artist who I just call Daniel because really, I don’t even remember what his real name was. He had a rough childhood and a troubled past, and all I wanted to do was hug him. He just wanted to live a happy, comfortable life, and I desperately wanted things to work out for him. He just caught up in a lie and one thing snowballed into the next and soon he was pretending to be this super rich missing kid and AH! IT WAS DELIGHTFUL. The only thing that I didn’t really like was the romantic subplot because I felt like it didn’t really serve much of a purpose, but besides that, everything was PERFECT. I really connected with his desire to be loved and to be seen, and he was a character I couldn’t help but want to protect with my life.

The family dynamics were VERY STRANGE, which is definitely the point because that family is messed up to the max. I never really knew who I could trust from Danny’s family, and things were always a little off about them. As Danny came up with his own suspicions about who was responsible for Danny’s disappearance, I formulated my own ideas, but nothing came even REMOTELY CLOSE to what was eventually revealed. AND WOW — THAT ENDING. I don’t think I’ll be over that for a long while. If you love reading YA mysteries where the twists are unexpected and the characters are unreliable, I highly recommend checking out Here Lies Daniel Tate!

The Bone Witch by Rin Chupeco

Tea is different from the other witches in her family. Her gift for necromancy makes her a bone witch, who are feared and ostracized in the kingdom. For theirs is a powerful, elemental magic that can reach beyond the boundaries of the living—and of the human.

Great power comes at a price, forcing Tea to leave her homeland to train under the guidance of an older, wiser bone witch. There, Tea puts all of her energy into becoming an asha, learning to control her elemental magic and those beasts who will submit by no other force. And Tea must be strong—stronger than she even believes possible. Because war is brewing in the eight kingdoms, war that will threaten the sovereignty of her homeland…and threaten the very survival of those she loves.

This is one of those books that I’d seen everyone raving about on Twitter a little while ago, so naturally, I had to pick up a copy to see what all the fuss was about. Unfortunately, the beginning really didn’t grab me, but I STUCK AT IT. And thankfully so. Once I got into the narrative and began to understand who the two perspectives were more, I really began to fall in love with the beautiful writing and powerful descriptions of the characters’ surrounding landscapes. A slow beginning, but one to stick with just to see how it ends. And I guess the idea of villainy and necromancy were an interesting concept. I just… didn’t really love it as much as I hoped.

But there was one problem — NOTHING MUCH HAPPENED. Sure, the descriptions were amazing and the writing was poignant and evocative, but besides that, there was nothing that kept me hooked and wanting to read on. The stakes didn’t seem high enough for me to be glued to the pages and while I liked learning about the powers that certain people had, sometimes that didn’t feel like it was enough to hold my attention. BEAUTIFUL SENTENCES? Check. FAST-PACED PLOT? Not so much.

I want to cry as I write this because I was promised such a fantastic novel by so many of my fellow readers, but I just didn’t really like any of the characters. They were all pretty MEH for me. There was nothing really about them that made me want to sacrifice a limb to ensure their safety or anything that made me fall in love with them. There were just THERE. #SHRUG. Perhaps if you’re a big fan of fantasy and don’t mind a lack of plot for 78.3% of the novel, you’ll enjoy this one more than me! I AM ALL THE DISAPPOINT.

Thanks to NewSouth Books for sending me a copy of this novel in exchange for an honest review!

Tamara Bennett is going to be the first journalist to strictly report only good news. Finished with high school, Tamara is ready to say goodbye to her sleepy little town and part-time job at the local paper. O-weeks awaits, which means parties, cute boys and settling into student res with her best friend Relle. Things take an unexpected turn, however, when she arrives home to find her house ransacked and her life in danger. What is this mysterious note? And why does it mean so much to one of Australia’s most powerful media moguls? Caught between a bitter rivalry and dangerous family secret, who can Tamara trust? Or should she trust herself? 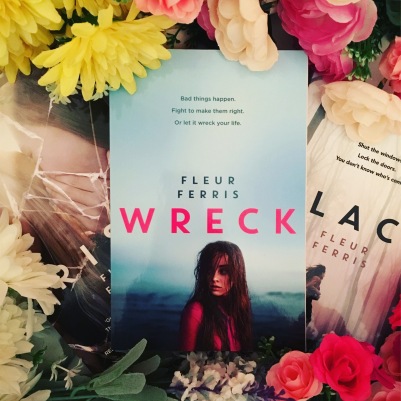 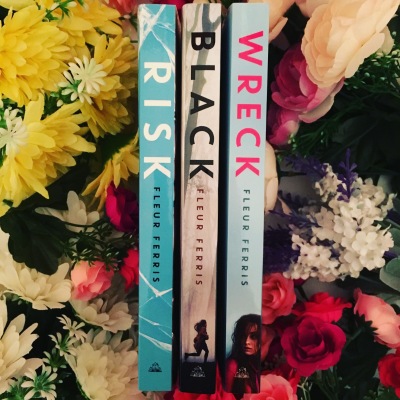 WOW. I had high hopes for Fleur Ferris’ new book, and thankfully, it didn’t disappoint. It’s hard to decide which of her novels is my favourite because they’re ALL SO GOOD. When I heard that this book was going to be called Wreck, I immediately started hypothesising exactly WHAT KIND of wreck would take place. Would it be a ship wreck? Or a plane wreck? Or will someone’s life get wrecked? ALL THE SUSPENSE. This book took me on one heck of a rollercoaster ride, and my eyes were practically glued to the pages. You could say this book WRECKED my social life. Sorry. I’ll see myself out.

Like with all of Fleur’s other books, the best thing about Wreck was the narrative. Fast-paced and full of twists, it’s impossible not to love her writing and become enthralled in the storyline. I never knew who I could trust or who was telling the truth, and figuring out everything alongside Tamara, our protagonist, meant that I never saw what was coming. WOW. Just wow. I never guessed where the plot would take us, and that meant this book was absolutely unputdownable. I wanted to race through it to see what would happen, but at the same time, I DIDN’T WANT IT TO END.

I absolutely loved how this book was written in alternating chapters — the present, where Tamara is trying to work out what the note she founds means, and why it’s important (while trying not to get killed), and five years ago, following the life of William as his family yacht capsizes and leaves one family member missing. Each of these stories were equally thrilling, and I loved seeing how they intertwined together. MIND = BLOWN. And I think I learnt a valuable lesson from all of this: super rich people can be SCARY. Both Tamara and William were strong, brave characters and I loved getting to know them and follow them on this chaotic adventure. I WANT MORE!

Have you read any of the books I talked about? Do they sound like the kind of books you want to add to your TBR? What’s one amazing book you’ve read recently? Do you give out many Five Stars? I’d love to know!