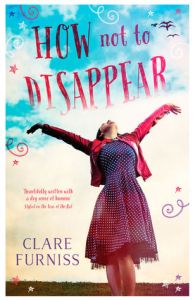 How Not to Disappear is a poignant and moving book, written by Clare Furniss.

Hattie’s summer isn’t going as planned. Her two best friends have abandoned her: Reuben has run off to Europe to ‘find himself’ and Kat’s in Edinburgh with her new girlfriend, who happens to hate Hattie. Meanwhile, Hattie is stuck babysitting her twin siblings and dealing with endless drama surrounding her mum’s wedding.

Then Gloria, Harrie’s great aunt who no one previously knew even existed, comes crashing into her life. Gloria is a woman who’s fiercely independent, rather too fond of a gin sling and is also in the early stages of dementia.

Together the two of them set out on a road trip of self-discovery – for Gloria to finally confront the secrets of her past before they are wiped from her memory and for Hattie to face the hard choices that will determine her future.

I don’t even know how to start this book review. You know when you read a book and you love it so much and yet you don’t even know how to collate your thoughts? Like when you’ve finished reading a book and you can’t talk for at least an hour afterwards because you’re so emotional? Does that happen to other people, or is that just me? Well… I’ve been trying to arrange my thoughts to write this book review for days. Okay… maybe a week? *covers face* I feel like there’s a fine line between choosing to write a book review too soon after you’ve read it when raw emotion is just flooding through you and you end up spazzing out on the keyboard…

… and deciding to turn the words over and over again in your mind like you’re tasting good wine, only to forget everything about the book. It’s like the names of all the characters and the plot has just been erased from your mind. And no, I haven’t tasted wine. But yes, that is a gif. Trying something different, are you, Sarah? Maybe, maybe not. I just felt like a gif was needed to accentuate my point and to highlight that’s exactly how I feel when trying to write a book review the minute after I’ve finished reading the book. And plus, Black Books is the funniest show ever to be made. If you haven’t heard of it, look it up. I’d recommend it for people over 13 though – not too appropriate for the youngsters 😉

So let’s start talking about the actual book, shall we? I just hope that enough time has past so that I can write a coherent review, but not enough time has passed that I’ve forgotten everything about this book without getting my thoughts down first. But we shall see. Wait… what book am I reviewing again? Kidding! Wait no, not kidding. It’s How Not to Disappear, right?

In case you haven’t guessed, I loved this book. I fell head-over-heals for the characters and the plot and I was left turning the last page of this book with a massive smile on my face and tears running down my cheeks. It made me laugh, it made me cry… It took me on one heck of a journey, and I’ll always remember what an impact this book had one me. You know when you read a book and you think to yourself, Ahh… this will be a book that I’ll give to my children one day… Even though you’re not even sure you want kids but reading a book that changes you like this one did makes you reconsider your life choices, just because you want them to feel the same way as you? How Not to Disappear was that kind of a book. I’m not saying that to be cheesy; it’s just the truth. If you’re a fan of contemporary young adult novels, there’s no doubt you’ll love this one.

This novel is definitely a character-driven one and while sometimes that can mean there is a lack of plot or that the plot is unengaging, that was definitely not the case in this book. Sure, the plot moved slowly in areas, but I felt that a fast-paced plot that was non-stop action wouldn’t have matched the poignant nature of this novel. This book is also not written in a simple, linear format. It alternates between the points of view of both Hattie and Gloria, and most of the chapters in Gloria’s POV were flashbacks. I’m usually very sceptical about books that are comprised of flashbacks because I don’t normally find them all that engaging or relevant. However in this book, I felt as though there were actually two narratives being told: one in the present: the one of Hattie meeting her long lost great aunt and dealing with her pregnancy, and one in the past: allowing us to gain an in-depth look into Gloria’s life as a teenager. I thoroughly enjoyed reading both parts of this book and felt like reading about Gloria’s life in the past was integral to the present-day narrative.

Getting to know both Hattie and Gloria on such an intimate level was definitely the highlight of this novel. Hattie was not just your typical YA heroine. She wasn’t the Chosen One, she wasn’t being relied on to save the future of her town and she wasn’t endlessly complaining that the new attractive, brooding boy in her class didn’t seem to look at her. Some people might even argue that she isn’t a real heroine. But honestly, I believe she is just as much a hero as Katniss Everdeen or Tris Prior is. She’s fighting her own battles and she’s trying to decide things that will determine her future. Yes, she may not be battling an oppressing government or saving her sister from imminent death, but I believe her battles can be translated to aspects of our own lives. That’s what makes her so relatable. I definitely felt like Hattie was someone I could connect to because her struggles as a teenager are so universal and I forged a deep emotional connection with her throughout the course of the book. It was also beautiful to see her grow as the novel progressed, allowing her to gain the strength to make the most difficult of decisions.

The other important character in this novel is, of course, Gloria. Gloria was such an interesting character to read about. Although she was suffering from dementia, she didn’t let that stop her from doing anything and she was determined not to be treated differently because of the illness that is deteriorating her memories. In a way, that makes her quite heroic. But she’s not just heroic because of that. The things we learn about her through the flashbacks allow us to gain a holistic view into her life and what has shaped the person she is today. What was most poignant about this novel was the similarities between Gloria and Hattie. Both females, even though they were separated by the differences in their ages, were strong and brave in similar ways, allowing them to forge an unbreakable bond.

Undoubtably, there are so many other characters in this book that I could spend time talking about. Even the secondary characters were well-developed and were integral to the storyline, not just placed there as a page-filler. And then there’s the ending. After going on both a metaphorical and a physical journey with these characters, it was saddening to say goodbye to them as I turned the final page. But this is not a book I’m going to forget about anytime soon and I know I’ll be rereading it again soon. I’d give How Not to Disappear by Clare Furniss a score of 10 out of 10. I honestly can’t recommend this book enough! Now it’s time for your say! Have you read this book yet? Have I convinced you to pick it up? I know I’m definitely going to pick up Clare Furniss’s other book, The Year of the Rat, when I’m in a bookstore next! Knowing me, the wait won’t be too long 😆

Thank you to Simon & Schuster Australia for providing me with this book in exchange for an honest review!

10 thoughts on “How Not to Disappear – book review”