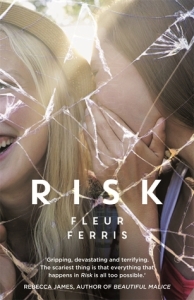 Taylor and Sierra have been best friends for their whole lives. But Taylor’s fed up for Sierra always getting what – and who – she wants. Everything from kissing Taylor’s crush to stealing the guy they both met online. And Sierra doesn’t even notice when she hurts her friends.

So when Sierra says Jacob Jones is the one and asks her friends to cover for her while she goes to meet him for the first time, Taylor rolls her eyes. But Sierra doesn’t come back when she said she would.

What if Taylor’s worrying for nothing? What if Sierra is just being Sierra, forgetting about everyone else and spending time with her dream guy? When Taylor finally tells Sierra’s mum that her daughter is missing, Taylor and her friends are thrown into a dark world they never even knew existed. Can Taylor find Sierra’s abductor in time? Or should she be looking for a killer?

Let’s take a trip back in time to about a month ago when I was at a book convention called ‘The Year Ahead in Youth Literature’ at the State Library of Victoria. I was just minding my own business, hearing about all the exciting new books coming out next year, when I felt personally attacked. You know why? Because Fleur Ferris is releasing a new book next year and apparently everyone who hadn’t read her first YA book, Risk, were seriously missing out and needed to reevaluate their lives. When I heard that, I cowered in shame. I was one of the guilty people who hadn’t read Risk yet. Flash forward to now, I’ve read Risk and I’ve realised that my life hadn’t begun until I had read this book. I had been dead for my previous 17 years.

While I may be joking, this book is no laughing matter. Risk deals with issues such as cyber safety and online grooming in such a thought-provoking and real way that you can’t help but realise all of us could easily fall prey to something like what happens in this novel. It’s tragic, haunting, and frighteningly real. Even though people who read this book may not know anyone who has been affected by these atrocities personally, it definitely feels close to home. For example, this book revolves around a group of 16 year old high school students in suburban Melbourne, Australia. I, myself, could fall into those categories and it was chilling to see how easily this can happen to any of us. I really think that this is a book everyone should read, especially teenagers.

My attitudes about online dating and cyber safety have definitely been affected by reading Risk. As Fleur Ferris is an ex-police officer, she definitely knows her stuff. Everything felt incredibly and devastatingly real – from the emotions the teenagers have, to the parental anxieties and then to the endless blaming of others to try and ease your own suffering. I found myself so wrapped up in this book that I devoured it in one sitting and was left crying my eyes out and having the overwhelming urge to throw my laptop out the window and never go onto the internet again. I also feel like I know a lot more about how these things happen. Like how photos can be warped and changed and merged together and how someone can search where you’ve been to make it seem like they were in the same place at the same time as you. It made me sick to the stomach to know that there are people out there who do that kind of stuff to lure in their prey. I just hope that everyone will get to read this book and gain a little bit more of an understanding about cyber safety. Who knows? This book really could help in saving someone from the deadly traps that groomers lay out for them.

One thing that I loved about this book was that it wasn’t just a thriller. Sure, there were some parts where I had to hold my breath and hope that everyone was going to make it to the next chapter alive. But Risk is also a contemporary read, shedding light to what an online predator really is and how to try and be more wary on the internet. These parts are definitely more informative than fast-paced and thrilling, but I think that’s good. If this novel was a high-speed rollercoaster from beginning to end, it wouldn’t have felt realistic. The way it was written allowed it to flow perfectly and shift between paces without getting repetitive or boring. I was also pleased to find that there was a touch of romance in this book. It’s not too prominent that it takes away from the main themes, but it realistically portrays the life of a teenager and how sometimes, feelings don’t wait. And sometimes, that’s what puts you in the most danger.

I only have one tiny issue with this book, and it’s mostly on my part. When I got to about the half way mark, everything felt like it could have been over. I didn’t know what direction this book was going to go in and I didn’t know what else could possibly happen. For about twenty or thirty pages in there, I was seriously wondering what the rest of the book could be filled with. Luckily, I wasn’t disappointed. I realised that just because one aspect of the plot seemed like a ‘closed case’, it didn’t mean that everything else was resolved. I enjoyed seeing the direction this book took after my brief moments of doubt and I loved Risk from beginning to end. Moral of the story: Don’t doubt Fleur Ferris.

Surprisingly, I actually really liked all of the characters. Despite the seemingly cliche of the contrast between two best friends, Taylor and Sierra, I still found them both very likeable. Even though I would get endlessly frustrated and wished they would just stop and think about things for a moment, their actions and their emotions made them so relatable. I honestly could see a piece of myself in both Taylor and Sierra and I felt that most teenagers would hold that same connection with them. I also enjoyed getting to know the secondary characters and I was pleased with the amount of information we were given on them. Sometimes these people seem a little underdeveloped, but that wasn’t the case in Risk. The level of involvement the adults took in this book was also very pleasing. Parents in YA books are often very absent, so it was refreshing to see them have such a critical role in this book.

Overall, this was a captivating and heart-breaking novel – and one that I’ll definitely be recommending to everyone I know. You’ll absolutely fall in love with this book if you’re looking for a heart-stopping and frighteningly real contemporary with a splash of thriller and a pinch of romance. I’d give Risk by Fleur Ferris a score of 10 out of 10. I can’t wait to read Fleur Ferris’s new book, which will be out next year! So let’s talk! Have you read this book? Have you read any other books with similar themes? Would this be a novel you could really relate to? I’d love to know 🙂

I’m currently reading THE MARTIAN and I’m absolutely loving it! 😍🙌🏼 I’ve been on a total sci-fi binge recently 📚💫🚀 • What’s your favourite sci-fi books? I’m always looking for more recommendations! 💖
Need a bit of reading fuel? @sparkandsparrowperth has got you covered! 🥰📚 • What’s your reading fuel? Coffee? Tea? Chocolate? Something else entirely? ✨ • Use my code WRITTEN10 for 10% off this gorgeous candle, and heaps of other products from @sparkandsparrowperth! ☺️💖
I had so much fun doing my two reveals for @sparkandsparrowperth this month, and I can’t wait to do some more very, very soon! 😱😍 • I’ve never done any product reveals before, so I’ve loved trying something a bit different and experimenting creatively (especially with my video reveal for this gorgeous candle!) ✨ • Is there anything you’d like to try on bookstagram this year? 📚💜 • You can buy a PURE IMAGINATION candle for your own collection from @sparkandsparrowperth - and you’ll get 10% off when you use my code WRITTEN10 💕
I’m currently reading A HEART SO FIERCE AND BROKEN ahead of @theyaroom’s Book Meet early next month! 😍📚 • Have you read it yet? 📖
What’s one silly reason why you haven’t tried something? 😂🙈 I never thought I’d like earl grey tea because Queen Victoria Schwab HATES it! 😱 But I recently tried it and now I’m OBSESSED - and it smells delicious 😍☕️ • This tea is French earl grey from @sparkandsparrowperth ✨ I’ve loved making some tea and sitting down to do some writing each night 😌📝 • Use my code WRITTEN10 for 10% off! 💕 • What’s your favourite flavour tea? 📚💜
I can’t believe I haven’t read these two yet! 😱 I bought them both this week and I can’t wait to dive into them ✨📚 • Have you read either of these gems? 🥰