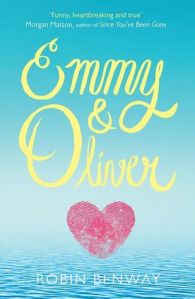 Emmy & Oliver is a heartwarming and honest book, written by Robin Benway.

When Oliver was kidnapped by his father ten years ago, Emmy’s neighbourhood split wide open. Now her best friend has reappeared and Emmy is hoping to pick up their relationship right where it left off. Are they destined to be together? Or has fate irreparably driven them apart?

All Emmy wants to do it be in charge of her own life. She wants to stay out late and to surf at her favourite beach – to do anything without her parents’ relentless worrying. But her parents can’t seem to let her grow up – not since the day Oliver disappeared.

Oliver had spent the last ten years thinking his dad was the good guy. He never knew that it was his father who kidnapped him and kept him on the run. Upon discovery of this, he finds himself returning to his old hometown and all at once, his heart begins racing and his thoughts swirling. Their separation makes both of them rethink their relationship and consider whether they were ever meant to be together.

This is one of those books that you hear about and immediately know you’ll fall in love with it, even before reading it. Thankfully, I wasn’t at all let down. This book was heartwarming and beautiful and intriguing – everything you could want in a book. I felt as though Robin Benway did an amazing job of depicting honest teenagers and their relationships and problems, and that’s part of the reason why this book really resonated with me. Emmy & Oliver also contained the right amount of romance. It definitely wasn’t all romance, as some may have guessed from the cover, but I think that’s good. I was very pleased to find that there wasn’t any instalove between Emmy and Oliver because I hate that type of unbelievable, cheesy excuse for ‘romance’. Instead, their relationship slowly grew and I absolutely love watching them turn from awkward acquaintances, to friends, and then something more.

Another part of this book that I found really interesting was learning more about Oliver’s ‘kidnapping’. It really helped me realise that there are always two sides to a story and a person who might be perceived to be the ‘bad guy’ may not be so evil after all. It showed me that everyone makes mistakes and we have to realise this before we can move forward. Quite a lot of scenes relating to Oliver’s kidnapping made me tear up. This was probably the most heartbreaking aspect of the book. Oliver, at his core, was just a boy who wanted his family back. It pained me to see him suffer and have people say things that were completely inconsiderate and ignorant. I even found myself sobbing at the end of this book. Emmy & Oliver is unsuspectingly emotional and it will take you on powerful journey of self-exploration and love.

Emmy was a cute main character but unfortunately, she wasn’t overly original or unique. She’s simply a nice girl and I liked getting to know her, but there was nothing about her that makes her completely memorable. I think that perhaps that was the author’s intention. Ever since Oliver was kidnapped, she was always ‘the friend of the missing boy’. But even so, I would have liked to see other characteristics to prove that these people were wrong about her and that she doesn’t need another person to define her. The only thing that set her apart from other characters in the novel was that she was a great surfer, and this wasn’t even a unique thing. I didn’t even fully understand why she loved surfing so much. Perhaps if her love for the ocean and the waves was properly explained, this would have meant more. Instead, I only got the overwhelming sense that she liked surfing because her parents didn’t know about it.

However, there are some aspects about Emmy that I really enjoyed seeing. I loved witnessing just how much she had grown up for the past 10 years because of Oliver’s disappearance. Her parents had kept a close watch on her ever since then and had restricted her freedom, but she still found ways to be independent. All she wanted to do was follow her dreams and make her own mind up about things. Her parent’s restrictions were suffocating her and I liked seeing her eventually help them realise that she is her own person and she must live her life. Emmy’s sarcastic and embarrassingly awkward personality made for a humorous and cringe-worthy ride – and one that I loved being taken on.

I feel as though I could have gotten to know Oliver better. He was a character that always felt elusive to me and I could never fully understand what he was thinking or feeling. I think this book could have benefited from dual points of view – Emmy’s and Oliver’s – however, perhaps it was the author’s intention to make Oliver a complex character that can’t be easily summarised. After all, this is how Emmy viewed Oliver in the beginning. This elusiveness highlighted how someone isn’t the same person they were ten years ago, and that people are always growing and changing. His actions also felt incredibly real. It felt normal for him to be unsure of how to act or what to do when he is back in his hometown. It was also incredibly touching for him to love his father so much, dispute what he had made Oliver go through. Oliver was a beautiful character because of his complexity and his capacity to love.

The relationship between Emmy and Oliver was definitely one that induced ‘the feels’. It made me squeal at the cuteness and smile uncontrollably. But the relationship between Emmy and Oliver was not the only one that I loved reading about. This book also highlighted the importance of friendships. The relationships Emmy had with Caro and Drew were ones to be envious of. They were all so close, tied not only by losing their friend ten years ago, but by the way they all supported each other since then. Some of the dialogues between this group of friend was the best moments of this book. These characters were all equally dynamic and complex and by the end, I felt like they were my best friends as well. Family relationships were also a really important aspect of this book. This book showed that your family is never going to be perfect and that every family is different, and that’s okay. Despite how dysfunctional or how much they fight, being a family means still caring for each other and loving each other no matter what. I loved how realistically this was portrayed.

This is definitely one of the most poignant and honest books I’ve read all year. The relationships between friends and family were realistic and heartwarming and the romance was adorable. I definitely recommend reading this touching and beautifully-written novel. I’d give Emmy & Oliver by Robin Benway a score of 9 out of 10. So let’s talk! Do you like the cover of this book? Have you read Emmy & Oliver or does it seem like something you’d like to read? Do you have any other book recommendations? I’d love to know your thoughts! 🙂

Thank you to Simon & Schuster Australia for providing me with this book in exchange for an honest review!

Just started reading SPELLHACKER! 😍🙌🏼 Have you read this one yet? What did you think of it? ✨📖💙
I’ve been burning my gorgeous coffee-scented Reading Fuel candle all week as I’ve worked on various scripts for class 😍🙌🏼 I’m totally obsessed! ✨ • What are you currently writing? 📖 I’m working on a webisode for class, a pilot for a competition, and my new YA contemporary WIP 🥰 • You can grab one of these candles for yourself (or a friend!) from @sparkandsparrowperth 🎉 Don’t forget to score yourself 10% off by using my code WRITTEN10! 💕
How gorgeous is this cover?! 😱😍 I seriously can’t wait to dive into THE REPUBLIC OF BIRDS 📖✨
I always need a photo in front of @whatluciesreading’s gorgeous shelves 😍📚🌈
Happy Valentine’s Day, everyone! 🥰💐 I hope you’re spending some time with your loved ones, treating yourself to chocolate and flowers, or cuddling up with a swoony book 📖😍 • I’m watching CALL ME BY YOUR NAME with my one true love tonight, @whatluciesreading ☺️❤️ I can’t wait! 🎉 • And I watched P.S. I STILL LOVE YOU for Galentine’s Day yesterday! 🙌🏼 It was super adorable - Kitty is the best though, right?! 💖 • What are your Valentine’s Day plans? ✨ • You can grab one of these gorgeous PETER KAVINSKY candles from @sparkandsparrowperth - and get 10% off when you use my code WRITTEN10! 😱💸
Super pumped to be watching PS I STILL LOVE YOU with some friends tomorrow night for Galentine’s Day! 🥰💖🎉 We’re gonna get pizza and squeal and it’s gonna be delightful ☺️🙌🏼 • Have you watched it already? Are you excited to watch it? 📽🍿