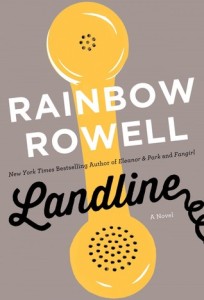 Landline is an alluring and beautifully written book by Rainbow Rowell.

Georgie McCool knows her marriage is in trouble – and it has been for a long time. She still loves her husband, Neal, and Neal still loves her, but she’s beginning to question whether that’s really enough anymore. Or if it was ever enough.

Two days before they’re supposed to visit Neal’s family in Omaha for Christmas, Georgie tells Neal that she can’t go. She’s a TV writer and something has come up on her show, so she has to stay in Los Angeles. She knows that Neal will be upset with her – he always seems to be a little upset with Georgie – but she doesn’t expect him to pack up the kids and go home without her.

When her husband and the kids leave for the airport, Georgie wonders if she’s finally ruined everything. And then, that night, Georgie discovers a way to communicate with Neal in the past and she feels like she’s been given an opportunity to fix her marriage before it even starts. Is that what she’s supposed to do? Or would Georgie and Neal be better off if their marriage never happened?

After turning the last page to Landline, it was official. I had read all of Rainbow’s books to date. At the same time, that fact feels really pleasing because now I am a better judge of just how amazing her writing is, but I’m also a tiny bit sad, because now I’m going to have to wait until she releases a new book to get lost in one of her worlds once again. Like all of her other books, I absolutely loved reading Landline. I’ve heard that a few people didn’t like Landline as much as her other books and while it wasn’t my favourite of hers, I still really enjoyed reading it.

One of the things I loved about this book, as with all her other books, was the writing style. I don’t even know how she does it, but Rainbow Rowell manages to write her books in such a way that makes them fresh, grabbing, and impossible to put down. The dialogue is sharp and funny, the descriptions reel you in and the plot twists will keep you coming back for more. I haven’t read many adult fiction books and I’m usually cautious about picking them up because I’m more of a YA girl, but when Rainbow is involved, there’s no way I’m passing up reading her books just because they don’t fall under the right heading. If you’re a person that doesn’t usually read adult fiction, I definitely recommend picking this book up. The only things that really separate this book from YA fiction is that the characters are all adults (for the most part) and they go to work instead of school. That’s literally the extent of the differences. Trust me when I say I’m not usually a fan of the everyday adult-fiction book, unless it’s something remarkable because otherwise I just generally don’t relate to it, but this book is definitely worth your time no matter what you normally read.

I was happily surprised by how well this book just worked. So when I heard about the ‘magic phone’, I was just a tiny bit worried whether it would come across as cheesy or if it would just be weird. But seriously. I should have had more faith in Rainbow. I think you could tell her to write a book purely on a penguin wearing a party hat and she’d do it excellently. She’s just that kind of author. Anyway, back to the phone. I’ve heard some people criticise the idea of the magical phone and I admit, it can be a little weird to get used to the idea of it at first, but once you open your mind to it and just roll with it, it’s really easy to understand and enjoy reading. The parts with the magic phone involved some really interesting and funny dialogue.

One thing that didn’t work so well in regards to the whole idea of the ‘magic phone’ was that sometimes I was a little confused as to when (time-wise) we were reading from. I kind of got lost as to whether I was reading from the present or the past. This book could have benefitted from having labelled chapters that didn’t just from present to the past to avoid confusion. Besides that, it would be hard for me to find much else that I wasn’t happy with in this book.

For the most part, I really enjoyed getting to know the characters in this book. To be honest, they weren’t my favourite characters out of all the other books Rainbow has written, but they were still vibrant and alive and enjoyable to read about. There were a few things that annoyed me about the characters though. For instance, Georgie seemed to be moping around for a large portion of this book. She refused to go home and she was so consumed by Neal possibly/maybe/probably leaving her that she couldn’t do anything, when him leaving was her idea all along. Her being miserable and unable to do anything was a bit frustrating at times. Despite all that, I did love her and I loved how much she cared about Neal. She was also flawed and didn’t always do the right thing, which was what made her relatable and made me really like her as a character.

I kind of had a love/hate relationship with Neal. I loved him in the past and how he seemed to care a lot more about Georgie back then. He seemed like a genuinely sweet guy. Maybe we didn’t spend enough time with present-day Neal to see what he could be like. Instead we always thought he was ignoring Georgie or just being a douche. So that basically sums up why I hated him. He could seem pretty cold and distant present-day even when Georgie was trying so hard to make things right. But the flashbacks made me fall in love with Georgie and Neal and made me want them to be together and I was ultimately happy with the end of this book. Another thing that slightly annoyed me about Neal was the fact that Georgie said how he rarely smiled. That’s probably another reason why he felt cold to me a lot of the time. However, when he did show the tiniest hint of a smile, I felt really happy for Georgie and for them together because she seemed to be the only person that made him happy.

Overall, I was really pleased with this book. While my favourite of Rainbow’s books so far would have to be either Fangirl or Eleanor and Park, I definitely enjoyed this one. Her writing style is unique and beautiful and funny to read and I thoroughly enjoy reading all of her books. I’d give Landline by Rainbow Rowell a score of 8.5 out of 10. If you haven’t read any books by Rainbow, I definitely recommend doing so!