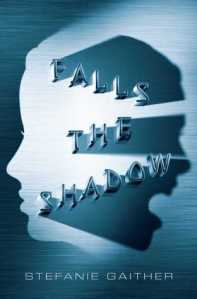 Falls the Shadow is an intriguing and thrilling book by Stephanie Gaither.

When Cate Benson was just a kid, her sister, Violet, died. A coupe of hours after the funeral, Cate’s family picked up Violet’s replacement. It was like nothing had happened. That’s because Cate’s parents were among those who decided to give their children immortality of a kind – cloning them at birth – which means Violet has the same life as before, all thanks to the advancements in mind-uploading technology. She even has the exact same memories as the girl she replaced. So is she the same Violet?

But when the most popular girl in school is murdered, all eyes turn to Violet. The paparazzi and anti-cloning protesters want everyone to think that clones are violent, unpredictable monsters. Cate is used to hearing all that. She’s also used to defending her sister. But Violet has vanished and when Cate sets out to find her, she finds herself in more trouble than she could ever have imagined. Cate is getting dangerously close to finding out the secrets that will cause her to question everything she has ever believed in.

Ever since I heard about Falls the Shadow, I had been desperate to read it. It sounded really interesting from what I had heard about it and I couldn’t wait to get my hands on it. Unfortunately, I didn’t love it as much as I had hoped. Don’t get me wrong, this book wasn’t bad, I just couldn’t really get into it for some reason. The plot was really interesting and for the most part the book was really well written, but I didn’t really feel anything for the characters or understand quite a few elements in it. It was quite gripping in the beginning, but I felt as though it dragged a little in the middle. I wished I had been glued to the book the entire time and that just didn’t happen.

I think one of the things I had the biggest issues with in this book was the amount of information it gave me at certain times. There were certain moments in the book that felt like pure info-dumping sessions. There were a few parts that purely had one person explaining to another what was going on and what the history behind the cloning was and it just wasn’t scintillating. I would have preferred learning things more slowly and actually understanding what was happening, rather than having everything dumped on me at the one time. There was one point in the book where I actually had to put the book down because I realised I just wasn’t processing anything that was happening because I was trying to understand the things that had just been said and my brain felt like it was in over-drive and it just wasn’t taking in any new information. At that point in time, I was really tempted to pick up a more easy read and know that I would probably understand it better than I could understand this book at that moment. It was really heavy in parts and there was often a lot going on. This book definitely isn’t a quick or light read and it requires quite a bit of focus.

The sci-fi and thriller elements of the storyline were complicated, but also interesting. I haven’t read that many books about cloning and I was excited to read another one and see what they did in this one. This book revolves around the idea that at birth, the parents of a baby can decide whether they would like to clone their child and then if the child died, they could have an exact copy of the child in existence. People have different views about this, as you would expect. Some are horrified and others opt to do this – like Cate and Violet’s parents. I like thinking about whether something like this could happen in the future and how many people would actually adopt this. It was really creepy to see Violet die and then a few hours later, an exact clone of her would take her place on the Earth, having all the same memories of the original Violet. Except in this dystopian future, the clones are stronger and faster than normal people, which has the potential to be very dangerous. See, this book sounds cool, right? I felt like Falls the Shadow had so much potential to be amazing and it just lacked in a lot of areas.

One of the areas that I felt was lacking was the relationship between Cate and her sister. We never really got to see that rivalry or anything and I felt like that was pivotal to the plot to see what they were like together before the original Violet died and how the family dynamics changed. There’s a little bit of explanation for them, but I felt like it was underdeveloped and any connection between them didn’t feel realistic. It was kind of the same for the relationship between Cate and Jaxon. While they didn’t fall in love instantly – and you might know that I hate that in books – it was pretty much close to it. Some of the things that happened with them were unbelievable and I didn’t feel for these two characters much at all. I also didn’t buy the fact that they felt so close to one another, after everything that happened to each other and how they have no reason to trust one another, and yet they somehow do.

One of the few things I actually liked about this book was the few moments of action. I liked the chase scenes and the fight scenes and I felt like they often felt like the most real thing in this book. I enjoyed reading these parts and they were well written. One of the things that wasn’t well written was some of the dialogue. A bit of it felt forced and juvenile and I would have liked to read some interesting conversations that kept me hooked. Unfortunately, for the most part, I felt like skipping over the dialogue and cutting to the main action, which was when I got the feeling that I liked this book.

While this book wasn’t necessarily bad, it just wasn’t as amazing as I had hoped it would be. It’s interesting enough and if you like science fiction and cloning, you might enjoy this book. However, I don’t think this book is going to be something that I’ll remember and reread in the future. It was good for a little entertainment, though a little tiring to read at times because of everything I had to learn to understand the plot. I’d give Falls the Shadow by Stefanie Gaither a score of 6.5 out of 10. If any of you have read this book or are planning to read it, let me know!

Thank you to Simon & Schuster for providing me with this book in exchange for an honest review!