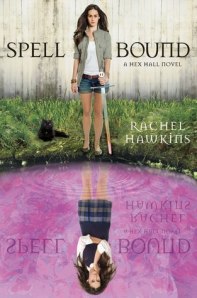 Spell Bound is the third book in the intriguing Hex Hall series, written by Rachel Hawkins.

Sophie Mercer once thought she was just an ordinary girl. Until she discovered she had the ability to do things that no one else could. Until she attracted too much attention to herself and was sent to Hex Hall, a reform school for Prodigium (witches, warlocks, faeries and shape-shifters). Until she found out she wasn’t even a witch… she was a demon. Sophie was just coming to terms with being a very powerful demon when the Prodigium Council stripped her powers and left her defenceless. Now powerless and afraid, Sophie has never been in more danger.

But Sophie is now at the mercy of the Brannicks, a family of warrior women who hunt the Prodigium. Well, that’s what Sophie thinks. That’s until Sophie makes a shocking discovery. The Brannicks know a war is coming. A war that threatens the destruction of everyone and everything Sophie cares about. The Brannicks believe Sophie is the only one powerful enough to stop this from happening. But without her powers, Sophie is unsure of how she could possibly make a difference.

For Sophie, everything is at stake. Can Sophie get her powers back before she loses everything?

From knowing nothing about this series and just picking up the first book because I thought it might be interesting, I’ve grown to love Sophie and the magical world around her. I hadn’t heard much about these books, but I’m so happy I made the choice to give this series a go. I completely fell in love with this series, and in particular, Spell Bound. I loved reading Spell Bound and I would happily read it again. Firstly, I’ve seen such a change in Sophie as this series has progressed. In the first book, Sophie was a bit afraid and she didn’t know how to control her powers. Now, Sophie has become such a strong, courageous person who understands how to use magic and is willing to sacrifice her own life for what she cares about. I really admire Sophie for her bravery and how she never gave up, even in the toughest of situations. From when I first saw Archer at the beginning of Hex Hall, I fell in love with him. He was funny, clever and constantly made me laugh. I felt like he was the perfect guy for Sophie. I’ve loved Archer for this whole series. But then in the second book, I got to know Cal a lot better. Unlike when I fell in love with Archer right away, it took me a while to really like Cal. He was sweet and nice to Sophie, sure. But I still thought Archer was… right for Sophie. However, the more that I read about Cal, especially in this book, the more I loved him. He was completely different from Archer, and yet I felt like he would also be amazing with Sophie. But by the end of Spell Bound, I have to admit that I liked Cal more that Archer… sorry, Archer! I just feel like Cal has always been there for Sophie when Archer wasn’t, and I know Cal could be trusted with anything. Cal’s such a kind, honest person and I believe Sophie deserves someone like that. Another thing I loved about this series it how many twists it had. When I first read Hex Hall, I thought this series was going to be a bit predictable because I could guess some of the things that were going to happen. However, the more I read, the less I knew what was going to happen. In Spell Bound, I could never have guessed what twists lay ahead. Spell Bound was really fast-paced and I was never waiting for something interesting to happen. I absolutely loved reading Spell Bound by Rachel Hawkins and I’d give it a score of 9 out of 10. I can’t wait to read the Hex Hall spin-off series!