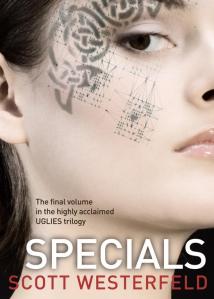 Specials is the book, written by Scott Westerfeld, that comes after Uglies and Pretties.

Tally is now a Special. But not just any Special. She’s a Cutter: a new branch of Special Circumstances where Tally’s friend Shay is the leader. Now Tally has become faster and more deadly than ever.

The Cutters know that people, Uglies and Pretties, have been smuggling in pills to distribute to the ‘bubblehead’ Pretties. These pills contain nanos that destroy the lesions in the brains of the Pretties that work to keep them calm and mellow. Tally and the other Cutters are put on a mission to stop these pills from passing into New Pretty Town and to find who is mass-producing this medication.

Tally, Shay and the other Cutters go on a wild chase to hunt down the people distributing these drugs. But will Tally and Shay survive bringing the Smokies down? And if they do, will Tally ever forgive herself for betraying her former friends?

I liked Specials. Although I enjoyed reading it, I found myself getting frustrated because again, Tally wasn’t herself, like at the start of Pretties. I much prefer Tally the way she was at the start of this series and when she cured herself from being a bubblehead. This book was really similar to Pretties in the way that Tally was different and she’s doing what she believes is right when she miraculously ‘cures’ herself to become ‘normal’ again. Admittedly, the plot line was different in this book, but the underlying story was very similar: Tally must discover herself and become normal by loving somebody. I also found this book much darker than the others. I was slightly disturbed that these Cutters needed to cut themselves to feel alive and ‘bubbly’. Every time the Cutters did this, it just made me cringe. Maybe it was good to include that part of the book, like when Zane said ‘What is it that you’re not feeling, that you have to do that?’ The fact that the Cutters did this just made this book so much darker and again, another reason it is different to Uglies. I liked seeing the world from a whole new perspective while Tally was a Special because her senses were so different to when she was an Ugly and a Pretty. I watched Tally come to terms with what she’s done and I liked how her opinions on everything changed as the book progressed. As for Shay… I really miss the Shay back in Uglies. Shay has changed so much from the beginning of the series. I was absorbed in the book from the very start. I always was curious to see how everything would work out for Tally and her friends and if Tally would ever become herself again. I liked reading Specials by Scott Westerfeld and I’d give it a score of 8 out of 10.